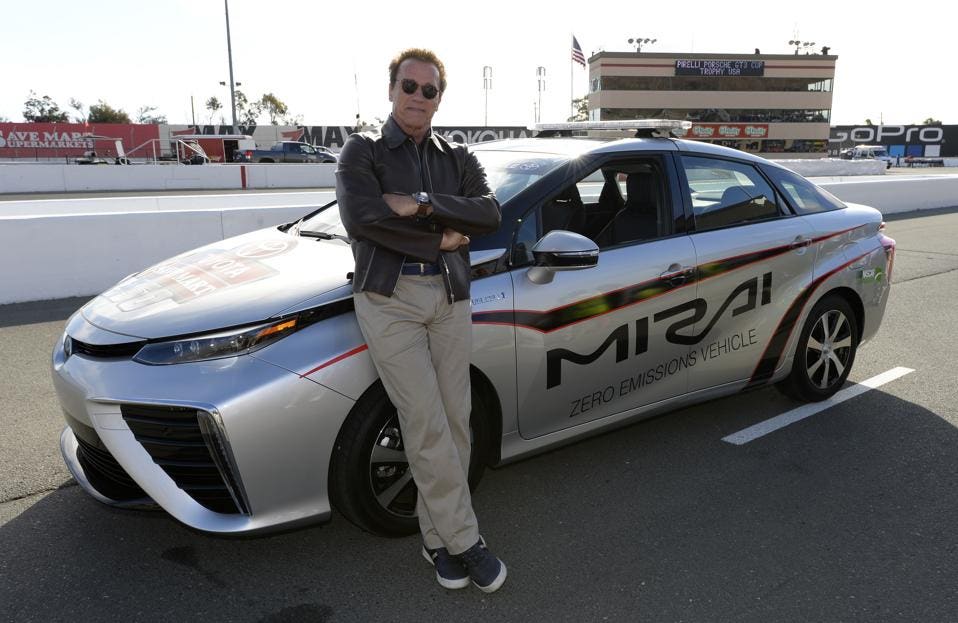 California’s policymakers are lobbying for hydrogen fuel to play a larger role in the state’s economy. A bipartisan group of 20 legislators penned a letter to assembly leaders requesting that $300 million of a $500 million executive order on emission reductions be set aside for hydrogen fueling infrastructure. Such a significant sum shows that California may be getting serious about hydrogen’s applications in the energy transition.

Hydrogen-powered fuel cells (HFCs) have gained traction among climate advocates as a potential source of emissions-free energy. As I’ve written before, HFCs work through a chemical reaction between hydrogen and oxygen in the air to generate clean electricity. The only byproducts? Water and heat. This reaction is far more efficient than an internal combustion engine: a giant leap from 25% efficiency to 80%. If scaled up, tomorrow’s HFCs could provide clean power to anything from commercial jets to utility power stations.

But today’s hydrogen is not so “clean.” The gas is used in various industrial applications as a feedstock, from oil refining to ammonia production. Every year, the United States produces 10 million metric tons of hydrogen, 95% of which comes from an emission-intensive process known as natural gas reforming. When natural gas is split into hydrogen and CO2 either by Steam Methane Reforming or Auto Thermal Reforming – and the CO2 is captured and stored, thus mitigating environmental impacts on the planet – it is known as “blue hydrogen.”

It is indeed possible to produce hydrogen in a clean way through renewables, known as “green” hydrogen, but this process remains rare and costly relative to “black” hydrogen (carbon intensive) or “blue” methods.

Green Hydrogen, The Fuel Of The Future, Set For 50-Fold Expansion

Athlete, Activist, Entrepreneur: Megan Rapinoe Has No Plans To Slow Down

Despite the element’s vast potential, the hydrogen economy faces a number of challenges. While global fuel cell markets totaled $2.83 billion in 2019, infrastructure has not caught up and produced sufficient demand to jumpstart production. The first liquid hydrogen carrier ship was launched in Japan in 2019, and while other countries hope to follow, getting there will take time and money,

The United States created the H2@Scale plan, providing a roadmap for research investment and avenues for public-private cooperation. For FY 2020, the DoE announced the approval of $64 million for 18 projects, including $8 million for a marine demonstration and $10 million for heavy-duty truck projects. The remaining $46 million is directed towards production, storage, and industrial uses.

One of the only places with hydrogen distribution infrastructure is California, where consumers can purchase FCEVs such as the Toyota Mirai for just over $50,000, and pay up to $16.51/kg. Capable of traveling 400 miles on a charge, the Mirai has a cost per mile of $0.23, relative to the $0.11 of a gas car. While not yet competitive, hydrogen FCEV purchases receive a $15,000 fuel credit and may grow cheaper as the technology spreads.

Maybe not anytime soon, though. The current number of these vehicles on the road is 10,665. The demand for hydrogen-based vehicles fell by 12% in 2019, and halved in 2020. Consumers are unwilling to brave limited refueling infrastructure.

While the personal hydrogen FCEV market shrinks, California has continued to invest in distribution infrastructure. In 2020, the California Energy Commission approved $115 million in funding, covering an additional 134 refueling stations.

Included are plans to open the first hydrogen-powered rail line in San Bernardino by 2024. The new “FLIRT H2” train will be built by Swiss-based firm Stadler in conjunction with the Sierra Northern Railway, wielding a $4 million grant to create the fuel cell locomotive. This would be the first commercial rail application of fuel cells, and could facilitate the growth of refueling networks outside the state.

Preparations for a larger-scale federal EV transition are already underway. The U.S. Postal Service awarded a ten-year, $482 million contract to Oshkosh Defense to make up to 165,000 EV-powered delivery vehicles. Might this present a significant opportunity for the creation of a fleet of FCEVs, even if limited to California-based operations?

Increasing demand for hydrogen fuel could also give a boost to demand for ammonia, used as a pre-cursor to H2, and refueling infrastructure. Global trading giants Trafigura and Yara have announced a deal to supply the marine shipping industry with carbon-free ammonia fuel. The companies have entered a partnership with MAN Energy Solutions to supply an ammonia “flex fuel” marine engine by 2024, with additional plans to develop retrofitting kits for existing vessels.

Because ammonia (NH3) can be ‘cracked’ to release the hydrogen within, there’s an opportunity for hydrogen to piggy-back off ammonia’s transportation infrastructure. This will help to solve hydrogen’s serious infrastructure problem.

But for hydrogen to have a truly viable future, lawmakers like those in California will need to continue advocating for investments and policies that bolster the hydrogen supply chain: production, distribution, HFC vehicles, and end-use infrastructure. Exciting new applications for hydrogen will not come to fruition without concerted public sector financing and private sector R&D. We will see if voters support this innovation and put their money where the politicians’ mouths are.