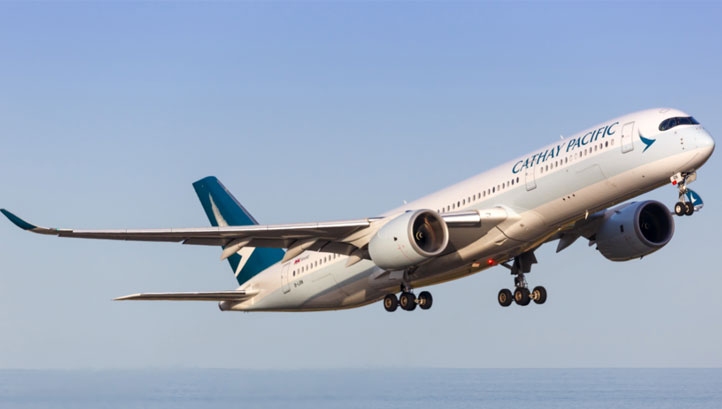 Cathay Pacific operates a fleet of more than 150 aircraft, serving destinations across the US, Asia, Europe and Australia

The new ambition is detailed in the airline’s updated sustainable development report, which was published on Thursday (20 May). The report states that Cathay Pacific “embraces its responsibility to lead the charge towards sustainable aviation and ensuring future generations can experience the joy of travel”.

Cathay Pacific’s plans for delivering net-zero are based around improving aircraft efficiency, scaling up SAF use and, finally, offsetting remaining emissions by expanding a carbon credit programme first launched for business travellers in 2007.

On efficiency, the firm will work to reduce aircraft emissions through a combination of retrofitting and new aircraft purchases, as well as engaging teams to reduce engine use on the ground. As of 2019, Cathay Pacific operated 155 planes. There is also a new target on efficient ground operations – to reduce emissions from this source by 32! By the end of 2030, against a 2018 baseline.

On SAF, Cathay Pacific is aiming to ensure that SAF covers at least 2% of total annual fuel requirements from 2023 onwards. It estimates that it will purchase 1.1 million tonnes of SAF within the next ten years. SAF will be sourced through partners including Fulcrum BioEnergy, which operates a household-waste-to-fuel plant in Nevada.

SAF can reduce life-cycle emissions by up to 80% compared to traditional jet fuel. However, most airlines currently only use it in small proportions in blends – partly due to a lack of supply and partly because current international regulations limit biofuel blends to 50%.

The final facet off Cathay Pacific’s net-zero strategy is offsetting. The airline has been offsetting all the emissions from our employee business travel for more than a decade and will now extend the commitment to all residual emissions. It works with The Gold Standard to purchase verified credits.

“The unprecedented pandemic has shaken the world and showed us that ‘business-as-usual’ is not an option when dealing with an imminent global risk,” Cathay Pacific Group’s chief executive Augustus Tang said. “Climate change, potentially a much more disruptive crisis, calls for ramped-up efforts.”

Cathay Pacific is headquartered in Hong Kong, which is due to publish a 2050 net-zero target in the coming months.

With electric and hydrogen planes capable of rivalling traditional passenger jets not at technological maturity or commercial scale, it is understandable that Cathay Pacific’s plans centre on options available today.

However, green groups have repeatedly warned that SAF and offsetting alone will not align the aviation sector with the Paris Agreement.

SAF has been supported by dozens of big businesses and with standalone funding from the Government in the UK and beyond. However, some airlines have overstated the proportion of SAF they use and bodies including the UK Government’s Climate Change Committee (CCC) have recommended that, along with SAF, more should be done to scale electric aircraft and to cap demand growth.

To this latter point, a new report from the New Economics Foundation this week calculated that proposals to expand four airports in England will lead to an increase in emissions up to eight times higher than previously claimed. It is calling for expansion proposals to be reconsidered by Ministers.

This argument will need to be balanced with the aviation sector’s desire to recover from the economic impacts of Covid-19. The International Air Transport Association (IATA) has confirmed that the industry is expected to lose more than $84bn in 2020.