Heating Homes Without Warming Up The Planet.

Baxi Heating has demonstrated its 100% hydrogen boilers installed in two homes in Low Thornley, near Gateshead. They showed the use of hydrogen-fuelled appliances in a real-world setting.

They have pledged to make only products compatible with low carbon energy from 2025, which means that gas boilers will be ‘hydrogen-ready’ and can be easily converted to work with hydrogen.

Nick Wilson, Commercial and Marketing Director at Baxi Heating, said: “We are developing new technologies that will help customers to heat their homes and businesses without warming the planet.

“While we are not wedded to any one technology, hydrogen represents a great opportunity. It is carbon-free at the point of use and enables families to use their heating and hot water in the same way they do today, without major changes to their central heating systems or homes. What starts today with one house will become a community of houses next year and then we could see hydrogen boilers in millions of homes by the next decade.”

The H100 project aims to convert a community, up to 300 homes in Fife, Scotland from natural gas to Hydrogen next year.

Paul Dunn, Head of Operations at housing provider Bernicia said: “It’s good for the future. We have got to get buy-in from our customers and our business, but hydrogen could be a good choice. The compatibility of the boiler with the existing properties makes it a strong option.”

The semi-detached properties have been built by Northern Gas Networks in partnership with the Government’s Department for Business, Energy and Industrial Strategy (BEIS) and gas distribution network company Cadent.

They will demonstrate the use of 100% hydrogen for domestic heating, hot water and cooking. The only by-product of burning hydrogen is water. They are being visited by some housing providers and other commercial entities for understanding their options on future proofing any new builds in coming years.

As part of its commitment to tackling climate change, the government is looking into creating a ‘pilot hydrogen town’ before 2030.

Hydrogen does not produce CO2 when it burns and can cut overall emissions. If every home in Britain ran on 20 per cent hydrogen, it would cause a drop in CO2 emissions equivalent to taking 2.5 million cars off the road. 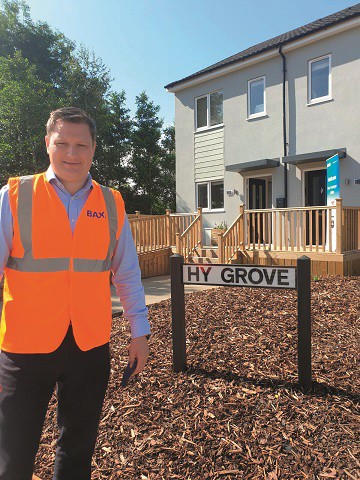 Hydrogen boilers are still only at the prototype phase, but they are being developed so they can run on either hydrogen or natural gas. It would mean end users converting without a new heating system being required.

What is the difference between blue and green hydrogen?

Blue hydrogen is when natural gas is split into hydrogen and CO2 either by Steam Methane Reforming (SMR) or Auto Thermal Reforming (ATR), but the CO2 is captured and then stored.

As the greenhouse gasses are captured, this mitigates the environmental impacts on the planet. The ‘capturing’ is done through a process called Carbon Capture Usage and Storage (CCUS).

Green hydrogen is hydrogen produced by splitting water by electrolysis. This produces only hydrogen and oxygen. We can use the hydrogen and vent the oxygen to the atmosphere with no negative impact.

To achieve the electrolysis we need electricity, we need power. This process to make green hydrogen is powered by renewable energy sources, such as wind or solar.

That makes green hydrogen a clean option – hydrogen from renewable energy sources without CO2 as a by-product.