GE and Cricket Valley Energy Center (CVEC), a natural gas-fired power plant in New York state, are working toward converting the facility to run on 100% hydrogen.

The companies said they plan to develop a green hydrogen technology roadmap (H2 Roadmap) and advance a demonstration project to reduce carbon emissions at CVEC’s combined cycle power plant located in Dover Plains, New York. The project is planned to begin in late 2022.

The initial step of the project will demonstrate the feasibility of converting the natural gas-fueled facility to utilize hydrogen, in support of New York state’s Climate Leadership and Community Protection Act (CLCPA), which mandates 100% zero-carbon emissions in the electricity sector by 2040. The project will be conducted on one of three GE 7F.05 gas turbines currently operating at CVEC by introducing 5% hydrogen blended with natural gas for several weeks, leveraging GE’s expertise with combustion technology using hydrogen and low-BTU fuels. 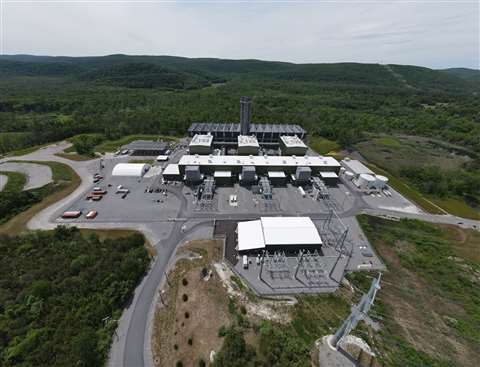 The Cricket Valley Energy Center in New York state and GE are studying how to convert the natural gas-fired power plant to run on green hydrogen.

GE announced earlier that it is collaborating on another New York demonstration project that will investigate the potential of substituting renewable hydrogen for a portion of the natural gas used to generate power at the New York Power Authority’s (NYPA) Brentwood Power Station on Long Island.

An outgrowth of an industry forum sponsored by CVEC earlier this year, the agreement plans to expand to include leading hydrogen providers, along with consultation from New York State and federal agencies to develop policy guidance related to the production, transport, delivery, and storage of hydrogen. The H2 Roadmap will serve as a research and development plan for technical changes necessary to increase the percentages of hydrogen utilization at the plant as it becomes more readily available, while adhering to applicable operational guidelines.

“As a leader in providing reliable, dispatchable power generation, we enlisted GE’s extensive experience with hydrogen to support the development of lower-carbon technologies in the State of New York,” said Chuck Davis, President of Advanced Power Asset Management, which manages the facility. “With this agreement, we will begin to define a roadmap for the conversion of recently constructed natural gas-fired power plants to lower and zero carbon fuels as an important initiative to maintain system reliability as New York increases investment in intermittent wind and solar to meet the CLCPA goals.”

“We are pleased to work with CVEC to support their efforts in achieving carbon neutrality across their operations, while demonstrating the collaboration essential for a decade of action to reduce carbon emissions from the power generation sector,” said Scott Strazik, CEO of GE Gas Power. “GE’s gas turbine technology, building on decades of our leadership in low-BTU fuel operations including hydrogen fuels, validates the important role existing technologies and assets can play in reducing carbon emissions and combating climate change.”

Previous Tokyo – Hydrogen Shows Promise of carbon-free future
Next From Coal to Hydrogen: Rail Travel Is Back In Fashion