Shell has opened a 10MW hydrogen electrolysis plant – believed to be Europe’s biggest – near Cologne, Germany, in the same week that Centrica revealed that it would like to convert its Rough natural gas storage facility for hydrogen by 2026. 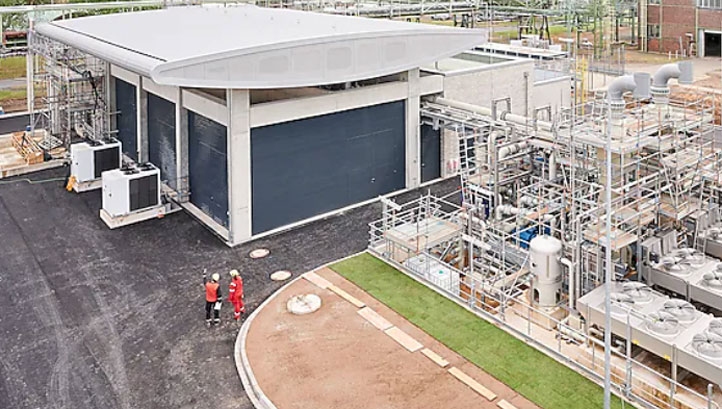 The Shell plant is called ‘Refhyne’ and is based at the Wessling site of its Rheinland refinery. It is powered with 100% renewable electricity.

ITM Power, which produced the electrolyser, claims that it will initially be able to produce some 1,300 tonnes of green hydrogen per year. This capacity could grow tenfold under a planned expansion, which could be finished as soon as 2024.

According to Reuters, the initial 10MW electrolyster cost around €20m. Around half of the funding came from Shell and the other half from EU initiatives.

In opening the plant, Shell in Germany’s chief executive Fabian Ziegler noted that green hydrogen still costs around five times as much as fossil hydrogen, but noted the firm’s work to bring costs down by scaling production. Along with Orsted, Iberdrola and other firms, Shell is a member of the Green Hydrogen Catapult, which states that its overarching mission is to halve green hydrogen costs by 2026. The business also sits on the UK’s Hydrogen Taskforce.

Shell has repeatedly stated that it sees hydrogen playing a key part in the energy sector’s net-zero transition.

The firm set a 2050 net-zero target in April 2020 and then built upon this top-level commitment with milestones for 2035. Plans to deliver these goals include cutting oil and gas production by 55%; scaling investments in hydrogen, electric vehicles (EVs) and carbon capture; and transforming five major refineries into “integrated energy and chemicals parks” by 2030. Such parks will host facilities like hydrogen electrolysers, sustainable aviation fuels (SAF) plants and chemicals plants.

Targets and delivery plans may yet be changed for Shell, however, The company was recently ordered to raise its commitments on carbon reduction by the Hague District Court. Specifically, the court wants the business to cut absolute net emissions by at least 45% by 2030.

Shell notably already operates a 20MW hydrogen electrolyser in Zhangjiakou City, China, and is planning other hubs in the Port of Rotterdam and Groningen Seaports, both in the Netherlands.

Diamond in the Rough?

McKenna stated that the project could cost £1.6bn to complete and create at least 3,000 local jobs during the construction phase.

Speaking to edie, a Centrica spokesperson said the business “needs clarity from the UK Government” before it progresses with the investment. The Hydrogen Strategy has faced a string of Covid-19-related delays but many across the UK’s green economy are hoping it will be published before Parliament rises for recess on 22 July – as per the Climate Change Committee’s (CCC) recommendation.

Centrica announced in 2017 that gas injection and storage at Rough, near Easington in East Riding of Yorkshire, would be wound down. It is planning to begin decommissioning at the site from 2023. According to the spokesperson, Centrica is looking to open Rough as a hydrogen-ready storage facility around 2027.

They said: “A repurposed Rough has the potential to provide around half of the UK’s hydrogen storage requirements, with a capacity of over 9TWh once fully converted or enough energy to heat one million homes for a year. This compares to our existing operating gas storage (salt caverns) that in aggregate would only deliver around 2.8TWh (or heat 300,000 homes) if converted.

“The flexibility a repurposed Rough provides would be invaluable, having the ability to accept hydrogen – whether pure or blended – as soon as it is operational.

“Rough is also close to offshore wind infrastructure in the North East, meaning it would be able to support the production of green hydrogen using power sourced from offshore wind which would otherwise go to waste.”

Centrica’s calculations are based on the CCC’s forecast that up to 20TWh of hydrogen storage will be required by 2050 in a net-zero Britain.

The plan to convert Rough feeds into Centrica’s overarching commitment to become a net-zero business by 2045.