One of the world’s first large-scale demonstrations of 100% hydrogen firing for glass production has concluded in Liverpool, in the same week that ZeroAvia inked a new deal to support its hydrogen plane trials in the Cotswolds. 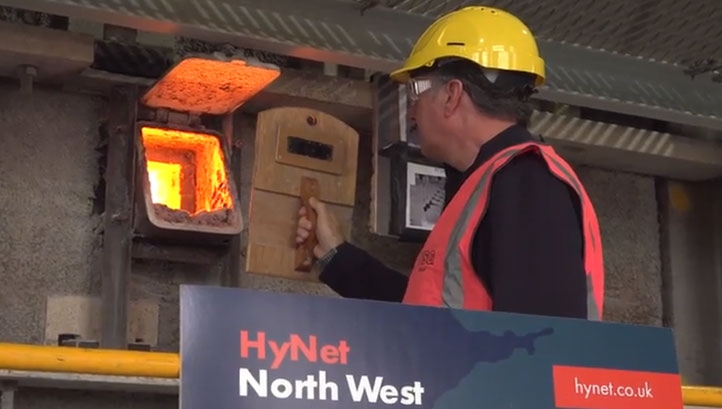 The demonstration for producing float sheet glass using pure hydrogen during the manufacturing process, as a replacement for natural gas, took place at Pilkington UK’s St Helens facility, near Liverpool.

Industrial gas company BOC supplied the hydrogen and Progressive Energy is acting as the consultancy for the project, which forms part of the broader HyNet North West portfolio of projects. HyNet North West covers hydrogen production, storage, blending and use, with end-use projects aside from heavy industrial processes covering shipping, rail, road transport and domestic heating.

The trial at St Helens is one of several projects underway as part of HyNet’s industrial fuel-switching programme. This scheme was awarded £5.3m from the Department for Business, Energy and Industrial Strategy (BEIS) through its Energy Innovation Programme last year.

Like other industrial sectors, glass manufacturing is heavily reliant on fossil fuels for processes that are challenging to electrify. By the UK Government’s own calculations, 85% of the fossil fuels used at UK glass plants are used to power furnaces. While strong progress has been made in improving energy efficiency across the sector, alternative fuels and other emerging technologies will likely be needed to align it with the UK’s 2050 net-zero target.

The hydrogen used at St Helens was ‘grey’ in the first instance – produced using fossil fuels. At present, more than 90% of all hydrogen produced globally each year is grey. The point of the demonstrator is to prove that firing at glass plants can safely and efficiently be powered by 100% hydrogen. In the longer-term, the HyNet project is striving to transition local industrial firms to ‘blue’ hydrogen produced by Essar Oil UK Limited at its Stanlow site. ‘Blue’ refers to hydrogen produced by processing natural gas and capturing the majority of the associated emissions with co-located carbon capture technologies.

HyNet is also exploring ‘green’ hydrogen, produced by passing water through an electrolyser powered by 100% renewable energy, but specific projects have not yet been confirmed.

“Pilkington UK, and St Helens, are once again at the forefront of innovation in industry with this world-first hydrogen trial on a float glass line,” Pilkington UK’s managing director Matt Buckley said.

“The HyNet project would be a massive step to support our decarbonisation activities. This full-scale production trial over several weeks successfully demonstrated that it is possible to use hydrogen to safely and effectively fire a float glass plant. We now look forward to the HyNet concept becoming a reality.”

The news comes shortly after the publication of the highly anticipated UK Hydrogen Strategy. The Strategy details plans to unlock £4bn of investment in blue and green generation, storage and usage this decade. It has been met with a mixed reaction across the green economy.

ZeroAvia already hosts an onsite electrolysis unit at its R&D centre at Cotswold Airport in Kemble. The hydrogen from Octopus will complement this, enabling the firms to reach 100% green hydrogen during testing, certification and commercial operations.

The fuel will be used throughout the development of a 600kW hydrogen-electric fuel cell powertrain which will power a 19-seat aircraft with a range of 500 nautical miles. The technology has already been proven for a smaller, six-seat aircraft.

“In order to achieve a commercially available, certified zero-emission, hydrogen-electric aircraft powertrain, we need large amounts of 100% green hydrogen and we are pleased to work with a UK-leader in this field,” ZeroAvia’s vice-president for Europe Sergey Kiselev said.

“Hydrogen-electric aviation is the only practical path to decarbonising flight at scale, as well as removing other harmful emissions from aviation that contribute to global warming.”

ZeroAvia notably received a multi-million-pound funding package from the Government last year and is hoping to host commercial flights from 2023.

In its Transport Decarbonisation Plan, the UK Government has taken heed from major airlines and positioned hydrogen, hybrid-electric and pure-electric aircraft as complementary solutions to sustainable aviation fuels (SAFs). It has since launched a consultation on how to ensure that SAF is actually low-carbon, with a new standard. Also under consultation is a potential requirement for airlines to procure certain levels of SAF.